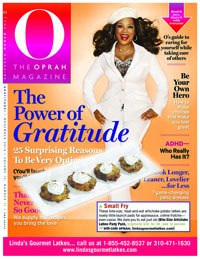 "Latkes to Love"
"It's not always easy to find a great Hanukkah gift. These bite-size latkes taste like my grandma used to make. Send them to relatives, or heat and serve as party snacks"

"Latkes to Love"
"It's not always easy to find a great Hanukkah gift. These bite-size latkes taste like my grandma used to make. Send them to relatives, or heat and serve as party snacks"

Delish.com - New on the Grocery Aisles

"Enter Linda's Gourmet Latkes.. I highly advise you to go out and find a package of these frozen latkes."

The New York Times
"If it's Frozen and Comes in a Box, Is It Really a Latke?"

"About the best frozen heat-and-serve latkes that have come our way are Linda's Gourmet Latkes."

"Linda's Gourmet Latkes are potato pancakes that come frozen and cook up crisp and delicious. I especially like the cocktail-size latkes, which can be topped with anything from smoked salmon to gorgonzola cheese. The product, made in L.A., is not yet available in San Diego."

"Linda's Gourmet Latkes was founded by Linda Hausberg- a savvy cook who, who at the urging of friends and family decided to share her secret recipe with the rest of the world. Available at select gourmet stores and online- $12.99 and up."

"We've had frozen latkes before, and...once bitten, twice shy. Then we found Linda's Gourmet Latkes. The sun rose, birds chirped and all was well in Latkeland."

"These recipes are quick and easy, but sometimes the holidays are so busy there isn't even time to look at a potato, let alone make latkes. Linda's Gourmet Latkes, the Los Angeles-based company will ship you frozen latkes that come out of the oven tasting tender, crispy, and practically homemade."

Latke's AKA Potato Pancakes are one of those things that need to be eaten more often, even if it's not Hanukkah! Crisp pan fried potatoes topped with sour cream and or apple sauce...No wonder Linda's Latkes are one of Oprah's favorite things. They're one of mine too!